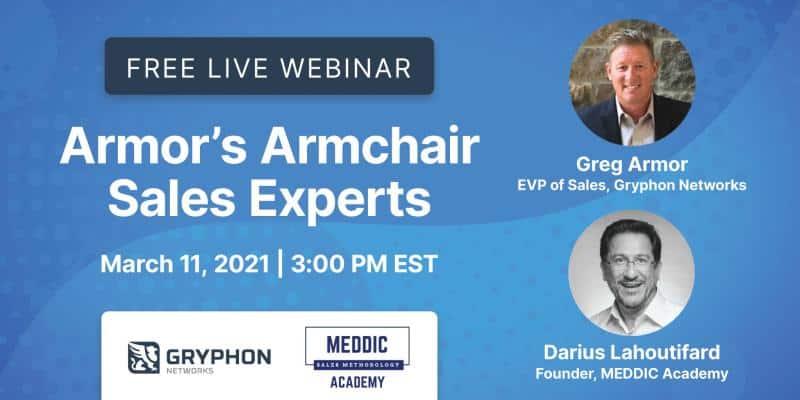 Darius Lahoutifard, Founder of MEDDIC Academy, joined Gryphon’s Greg Armor for a webinar and spoke about the MEDDIC approach to sales.

Greg Armor: How did you come up with the MEDDIC approach?

Darius Lahoutifard: I was involved in start-ups and my different companies, but I was also a pioneer in the internet environment with patents and new businesses. When SlideShare and some of those platforms were created, one thing I did was post a brief version of MEDDIC on SlideShare for the public. I thought everyone should know that. But I was not at all in the business of training salespeople. Once in a while, I would get a call from people asking to come speak at their sales kickoffs and share my experience.

When I sold my last company, I took some time off to spend with my family and wondered if I even wanted to start another business. But in the meantime, I realized that MEDDIC deserved more. Being a tech guy, I thought, let’s build a platform for MEDDIC Academy. That will always help people, no matter what I am doing. Before I knew it, 4 years later we were the #1 platform out there. I wanted to be semi-retired, and now I’m back on the job full-time!

What would you tell people who are debating which sales methodology out there to use for their organization?

Most of the sales methodologies out there are great methodologies, they just have a different perspective on the same thing. MEDDIC is looking at the sales situation through qualification. One thing that sets MEDDIC apart is that it is the only methodology that was built from the ground-up. It was created by doers. By people who are great in sales and execution. There was no nonsense in developing it to write a book; I just wrote my book 6 months ago – after 25 years. The point was to just do it!

We have three learning phases in MEDDIC Academy. The first is the sales-based eLearning where people learn on their own through videos and quizzes. The second part involves interactive, live workshops that are virtual instructor-led trainings. Here you practice what you have learned so far. Then, the third part is coaching for your own businesses and opportunities. For example, what has to be done now to make sure this deal will come in by the end of the quarter.

One of the key things I see is that people leave our program and are ready with questions to apply to all of their opportunities. There is no other methodology that gives you that.

What do you think is the most important letter in MEDDIC?

That’s a tough one. You’re asking me to rank the importance of those elements, when I’ve spent all my time saying how important every single one is! You can miss a deal if you miss just one of the elements. If one piece is missing, the puzzle is not resolved.

But if I had to pick one, the preferred one is the Champion. No, champion, no deal. That is a statement that says it all.

Where do you typically see people fall short in the MEDDIC process?

One of our latest lessons covers this, which is the difference between quantifying pain points and metrics. I see so many people, as soon as they find a number expressed by the customer, think that’s metrics. With metrics, you need to have a comparison point. You need to take quantified pain points, relate them to your solution, and then you will have metrics as a comparison.

Faced with signs of economic uncertainty in the second half of the year, sales leaders across all industries are turning their focus to managing budgets and supporting revenue – but…

Episode 4 Ft. Sofia Rodriguez: Gryphon.ai EVP Greg Armor interviews top sales experts to explore the methodologies that these leaders have developed and practice at their organizations. This mini-series featuring The…

Episode 3 Ft. Richard Harris: Gryphon.ai EVP Greg Armor interviews top sales experts to explore the methodologies that these leaders have developed and practice at their organizations. This mini-series featuring NEAT,…