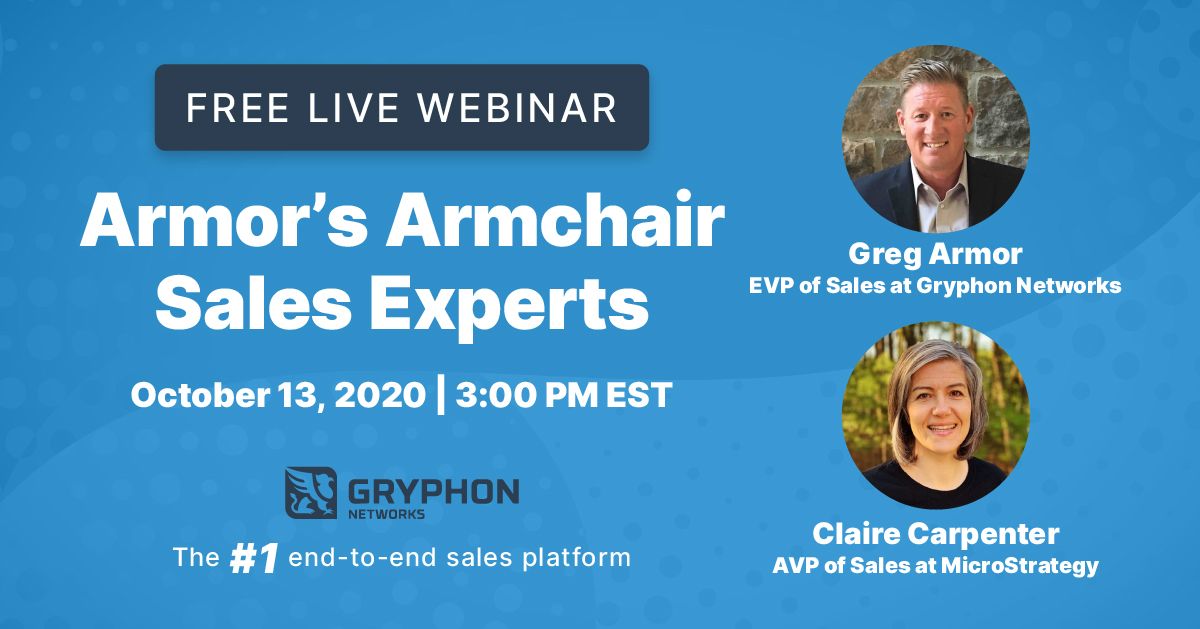 Claire Carpenter, AVP of Sales at Microstrategy, joined us for a webinar to discuss how various top sales leaders were crushing their numbers and leading their teams to success. Specifically, Claire touched on the importance of women in sales and having mentorship opportunities and diversity at your organization. The following features a few highlights from our conversation with Claire:

Gryphon: What do you wish somebody told you early on in your sales career?

Claire Carpenter: When I first started out in tech, I was the only woman in the room and the youngest in the room. It was quite isolating. I wish somebody had told me then that it was OK to be feminine and that it was OK to develop my own style. All of the examples around me were men. They were all doing this job roughly the same way.

I asked for a mentor, and the answer was, well, we’ve got one woman in the organization – she should be your mentor. But I wasn’t inspired by her. What I realized was, I don’t only have to have female mentors. But it’s been so invaluable to me to have female mentors, to talk to a fellow woman about a conversation, how I would voice something, and the language I would use.

Early on, I didn’t want to stand out. I felt that I stood out too much already. However, what I realized was, people wanted to see themselves in their vendors. So, having some diversity in a sales organization is a great thing, because our customers have become way more diversified.

Can you share one of your mentorship experiences with us?

It’s hard to pick one, but Susan Cook was a great mentor. I was in Detroit and covering the East region with IBM and an account executive told me that I needed to ask Susan Cook to be my mentor. He said, “tell her I sent you, and tell her she’ll recognize the twinkle in your eye.” She was two levels above me and a senior executive, and I was younger then. I didn’t know Susan, but I wrote her an email asking her to mentor me and got on a plane back to Boston. I landed and had an email back from Susan saying yes, absolutely. I had this total sigh of relief, thank goodness she said yes.

That went on to be a mentoring relationship where I talked to her once a month for half an hour. She consistently gave me such good advice and we developed a friendship, and then I worked for her when I came to Microstrategy. She’s an incredible human being and an incredible sales leader. Every time I was in a room with her I learned something – and that is so important. The way she talked to customers, the way she coached people; she’s the kind of person who would tell you that you have spinach in your teeth. You need people like that to tell you when you’re messing up because otherwise, you don’t improve.

Why don’t you tell us about the “At the Table” initiative you have at Microstrategy?

At the Table is a women’s empowerment group. It’s been around for almost five years now. We held in-person events, and now, obviously, we’re moving to virtual events, but it’s really about championing women at the company and giving them a network for mentoring and coaching.

We bring in external speakers – most recently we had a speaker come in to talk about presenting yourself on Zoom. We also do a book club every so often. It’s been a great experience, and now I’m a board member. It’s been great to connect with dynamic women in the organization and give back by being accessible to other women in a way I didn’t have access to when I was in my first sales role.