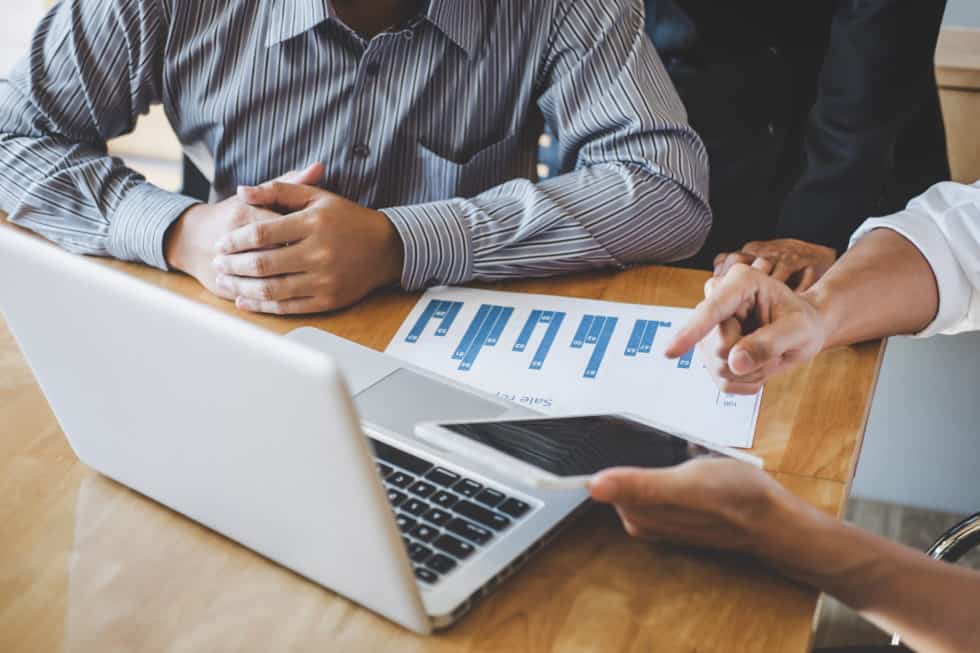 The following is the 5th chapter of the Gryphon Sales Performance Methodology series. In case you’re just getting started, here are the previous chapters;

Read Ch. 2: The Implications of Limited Visibility into Actionable Data

What is Peak Sales Performance?

Once you can answer the critical question: “What are my reps doing every day?” then identify what is working and what isn’t working, and establish training that underscores those repetitive behaviors, the next step is to begin to optimize reps’ daily routines in a sustainable way.

And, now that you have a benchmark that is representative of success, you are ready to begin to optimize team performance. First, there needs to be clear communication with sales reps to ensure 100% participation in the new training and the new system.

Without making the workflow mandatory, the system will fail to work because sales reps will choose to continue with their existing processes undisturbed.

Ideally, you should tie a component of their compensation to a minimum level of activity, which will incentivize all activity to be trackable through the corporate system. In other words, “If a call is made through a device or dialer other than via the approved system, it didn’t happen.” By doing this, you are ensuring maximum participation which is essential to success.

So, once the rules of engagement are established, create a blueprint for the daily activity that will serve as the daily minimum for the team and each individual. Depending on the baseline from Phase I, you may elect to start with a minimum number of call attempts, contacts (conversations), or even the number of “optimal outcomes” — things like set appointments, closed up-sell, or follow-ups.

Note: Which Key Performance Indicator (KPI) you select is less important than choosing the one that is best identified as essential to your team’s success.

Goal-Setting: Depending on where your team is in its evolution, it’s a good idea to set goals that are relatively attainable. For example, if your goal for the team is 50 call attempts per rep per day, and your baseline is 20, don’t set the Day-1 goal to 50 attempts. Start with something that is more reasonable.

The Gryphon System isn’t a quick fix, but rather a long-term sustainable strategy. You will get your team to 50 calls per day — but there is no sense in “flipping the switch” only to demoralize the whole group quickly. Enforced minimums are critical, but you don’t need to go from 0 to 60 in three seconds. Sustained, gradual improvement is a far better course of action and one that will not jeopardize morale at a critical time in the Optimization Phase.

Defined Cut Over: You want to make sure you set a specific cut-over date from which the team will be monitored with the new expectations of activity. After selecting the date, it should be communicated and launched.

From day one, you should be able to observe the activity to validate that the system is being used and quickly solve problems that emerge. The importance of rapid response related to early issues is essential to reinforce the commitment to this new process and to show that problems will be identified and fixed quickly.

Underperformers and Cooperation: Invariably, you will identify agents that are underperforming against set goals. Perhaps these were reps who had been vocal in their skepticism as the new system was being rolled out. Sales reps often march to the beat of their own drums, so you will likely encounter reps that do not align with the program.

This problem can arise in two scenarios:

This initial analysis must be initiated quickly upon the launch of Phase II because it is at this point that most new projects lose their steam — and it’s highly likely that reps will assume the same fate awaits this methodology as well. It’s important to remember the central goal of the program is to establish a daily benchmark of success and continuously optimize it over time.

Many organizations struggle with letting people go, even if due to non-performance. With this system, managers have a mission-critical, objective way to assess non-performers and can replace or redeploy them if they are unable or unwilling to follow this new regimen.

The moment other team members become aware that specific reps are not being held accountable, the fabric of the program quickly unravels. Clear communication and active management are the best ways to provide advanced notice of expectations.

As such, senior executive buy-in is a prerequisite to the initiation phase. The commitment to success needs to be a company-wide initiative, not a departmental project – especially when it involves human capital. To benchmark, success is to always be honest with yourself and keep your eyes wide open.

Agent-Specific Benefits: This system goes beyond being a simple sales performance management tool to supervise and “check-in” on reps. Though, it’s important to understand and articulate the benefits the agents gain through the adoption of this system.

Productivity: Most sales reps are in business to make money.

By getting a clear understanding of the daily behaviors that result in success and simple measurements of sales performance, the middle-of-the-pack reps will become more productive, efficient with their time, and effective overall. Top performers will appreciate the ability to be able to quantify their success as justification for a promotion or a future role.

Moreover, low performers will now have targets for which they can strive for if they are committed to getting better and becoming successful.

Two-Way Accountability: One of the problems, when inexperienced reps begin a new job, is the misalignment of expectations. Specifically, between the employer’s expectations of what the new hire is being asked to do and what the new hire is expecting from the job. Typically, someone in a junior sales position is provided with a level of classroom training, “ride-along” with seasoned reps, and company-directed demonstrations and product knowledge-transfer.

What is not usually included is a measurable, defined blueprint for success. As a result, if a committed rep, trains, studies, and practices to their best ability and does not see the results, they are often left frustrated and become discouraged over time. On the other hand, the manager has ensured the rep was adequately trained and presumably attentive but is left to surmise that the rep can’t get the job done.

This scenario plays itself out thousands of times for some companies every year at incredible costs and use of resources.

When you can measure the daily behaviors that predict sales performance success, it’s much easier to create a blueprint for success that can be given to new hires, so they know what exactly they need to go beyond training and study to be successful.

The rep can then become accountable to the manager to faithfully execute the blueprint. Once the rep has completed the typical onboarding period but has not attained a certain level of success according to plan, the manager becomes accountable to the rep to either coach, train, or mentor the rep. The blueprint can be adjusted and reevaluated for practical application or refinement and can determine if the rep is not likely to be successful.

This process is how to establish two-way accountability and any executive should strive to promote this within their organization. It will also make hiring more productive because you’re hiring reps who are more likely to succeed. It will reduce the time it takes to make a rep successful and help improve hiring or internal promotion of managers and leaders.

Trust but Verify: The most important aspect of this system is the validation of the standards that are outlined during the optimization phase. For the system to work correctly, managers must validate the daily performance of teams and agents on a regular basis, but especially upon the launch of the new system.

What’s more, is that the system provides a perfect window into activity with a high degree of accuracy and is available at any time. As a manager, the daily goal for the use of your dashboard should be to eliminate guesswork or ‘hunches’ and start coaching off metrics.

Showcase Top Performers: Once you identify a pattern of behavior that repeatedly shows positive sales performance results (such as calls-to-appointment, time-of-day effectiveness, etc.), you must add it to a template that will serve as the blueprint for success for every rep in the group. Note that, though this template is defined, it is not set in stone. Continuous optimization enhances the value of the model as more data is uncovered to support it.

Sales can be a demanding profession, mainly when the focus is on outbound calling to individuals – whether a business, or consumer – who are not expecting your call and maybe rude, confrontational, or even hang up. For this reason, managers should define the optimal repetitive behaviors and formally monetize them for the team.

Financial Tie-in Compensation: It is strongly encouraged to develop a financial hook to the team to serve as motivation to develop the right activity habits. For maximum success, don’t make attainment a bonus — presumably, that is what commission provides.

Make sure reps understand what is behind each activity metric and how these metrics directly relate to a dollar of their income. If they can quantify that every call is equivalent to $1 of commission/bonus, it will be much easier to pick up the phone each day.

Additionally, set up a reward for the repeatable ’causes’ that get the optimal ‘effects’, and you will most likely get more of both from your team. This way, you are rewarding the sustainable activities that build continuously instead of having an impact that may or may not be repeatable.

READ THE REST OF THE SERIES HERE:

2023 Developments in Sales and Marketing Compliance

For businesses conducting sales and marketing outreach, most are familiar with the Telephone Consumer Protection Act (TCPA), the federal act signed into law in 1991 regulating the telemarketing industry. The…

With the potential of recession following businesses into 2023, many B2C organizations are leaning into refocusing budgets and prioritizing their customer bases. While customer support isn’t always money generating, it…

This article was originally posted on martechvibe.com. Gryphon.ai, provider of a platform for artificial intelligence-powered conversation intelligence and Telephone Consumer Protection ACT (TCPA) and Do Not Call compliance, has made…